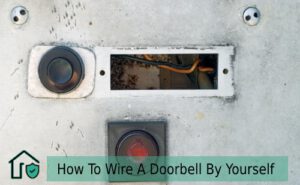 It’s hard to find homes without a doorbell at the present time. And in most cases, new homes come with one doorbell at the front while another resting for the back door. There are different sound variations available to choose from as well.

It can be melodies, chimes, or regular buzzers too. No matter what type you’re using currently, the doorbell isn’t something that’ll last you forever. It can stop working and hence you’ll need to look for a new one or at least repair things.

One day when you discover the need of changing your home doorbell system or simply repair it, rewiring will be definitely a part of the process. So why not today We give the topic of how to wire a doorbell some attention?

The wiring process is nothing hard and it mostly involves pretty simple tools. You will require 15 to 30 minutes for the whole process usually. I’m about to break down in parts to make it even simpler. Enjoy!

Step 01: Familiarize the Parts to Yourself 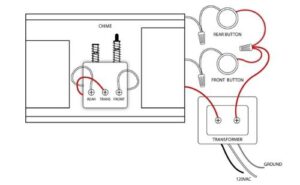 To start smart, you need to grasp some ideas about the doorbell parts you’ll be working with for this wiring process. This isn’t something too hard to understand, so chill. Basically, there are several parts to talk about of a doorbell.

The first part is a push button that stays within your home’s exterior or main entry door. This button basically tells the chime to ring whenever there’s someone at door pushing it. Next comes the main operative part.

And it is the doorbell chime. This is where all the sound production happens. It comes with terminals placed on the central hub. The wires from push button enter terminals. It also connects to the transformer which we’ll talk about later.

Typically, you get to see around three terminals called front, trans, and rear. The rear doorbell push button connects to the same-named terminal. The same goes for the front doorbell pushbutton. And trans terminal that is also known as a common terminal is for the transformer.

Apart from the terminals, there are resonators too. These are two flat metal bars sitting right up to terminals. Chime also has solenoids in it.

Step 02: Wrap Your Head Around the Concept of Transformer

To understand how to wire a doorbell chime you can’t skip understanding the concept of the transformer. Doorbells need a lower voltage to work properly. And so, they can’t be connected with your home’s electrical system directly. That’s when the transformer enters the chat.

This part basically wires into your home’s electrical system. And it allows the connection of chime and push-button at a lower voltage. The part usually resides within an inconspicuous location inside an electrical junction box. It can be inside or outside of your home. There are screw terminals here that connect to the chime and push button via wires.

Also, you see the ground, neutral and hot wires with a transformer. These wires will connect the transformer to your main electrical system. The ground goes with green, neutral fits with white and hot wire meets black for proper wiring.

Once you are done identifying the common parts of a doorbell, you’re ready for the next step. And it’s about wiring the doorbell chime for home.

With a Single Chime

The most common setup is a single chime with a doorbell button. Here you need to connect the push button with chime’s front or back terminal. Not both at the same time. Then you focus on connecting the transformer to both doorbell push button and chime. And this makes the chime setup complete.

However, if you are wiring for a double push-button with solo chime setup, things are a bit different. This is basically the case when you want a doorbell for both back and front of your home. In this case, you connect the buttons to their corresponding terminals on chime. No matter which doorbell button a guest pushes, your single chime will ring without any trouble. That’s a pretty standard setup and also it is fairly common.

If you have double chimes to connect one or two pushbuttons, things will be again different. Let’s first clear the matter of using one front push button. In that case, you will attach the button to both front terminals of chimes. Also, the transformer connects to both chimes’ trans terminals. This setup works best for people who wish to hear front doorbell ring even from different areas of their home.

Now if you have double push buttons, then the setup should sound like something else. The front push button will connect to both chimes’ front terminals. And in the same way, rear push buttons will be attached to rear terminals of both chimes.

Related Guide You May Also Love to Read:

On that note, it’s almost the ending part of today’s topic. I’m hoping you have a clear concept about how to wire a doorbell now. There are a few things I want to include before leaving. It’s good to use some wire supports along the wall if you are using long stretches.

Also, have an eye over the metals you use for installing wires. For example, staples, these need some insulation to avoid any arcing incident. Also, make sure you use electrical tape to cover exposed wires. Any regular tape will not give the protection that you definitely need.

Finally, take your time to understand this wiring process and you can even refer to diagrams in case of confusion that are available online. Best of Luck!

Greetings, This is Tom Vincent. I’m a home Security Expert and Web developer. I am a fan of technology, home security, entrepreneurship, and DIY. I’m also interested in web development and gardening. I always try to share my experience with my reader. Stay Connected and Keep Reading My Blog.
Follow Me: Facebook, Twitter, Pinterest

As an Amazon Associate We earn from qualifying purchases When you buy through links on our site otherwise no extra cost to you.